The Coastal Change Assessment aims to create a shared evidence base to support more sustainable coastal and terrestrial planning decisions in the light of a changing climate.

The Climate Change (Scotland) Act 2009 requires the development of an Adaptation Programme to take forward the risks identified within the UK’s Climate Change Risk Assessment (UK-CCRA). The UK-CCRA anticipates increases in sea level, coastal erosion and coastal flooding to increasingly affect Scotland’s soft coastlines and the assets found on these coasts. Shoreline Management Plans have been produced for only short sections of the Scottish coast which limits the information available to coastal managers. Consequently a National Coastal Change Assessment (NCCA) has been commissioned by the Scottish Government and is supported by a number of agencies.

The NCCA aims to establish historic coastal change by extracting the georectified coastline position from OS 2nd Edition Country Series maps (1892-1905) and to then compare it to both the 1970’s and current coastal position (updated by LiDAR datasets where available) in order to estimate past erosion/accretion rates. Using the historic coastal change rates the coastline position can then be projected into the future, albeit mediated by a Coastal Erosion Susceptibility Model (CESM) whose function is to limit erosion to areas where the hinterland is susceptible to erosion. The CESM is a national GIS assessment at 50 m raster resolution which models the physical susceptibility of the coast. The model uses a range of data (elevation, rockhead elevation, proximity to the coast, wave exposure, sediment accretion, and coastal defences) which are ranked and amalgamated into a single raster dataset reflecting erosion susceptibility. Using the erosion rates combined with a number of socioeconomic datasets, key assets at risk from future coastal erosion can be identified.

The NCCA aims to inform existing strategic planning (Shoreline Management Plans, Flood Risk Management Planning, Strategic and Local Plans, National and Regional Marine Planning etc.) and to also identify those areas which may remain susceptible in the coming decades and require supplementary support. The identification of susceptible assets will enable the development of future management policies and adaptation plans robustly based on a strategic and objective evidence base.

The project commenced in January 2015, and is expected to be completed by September 2016.

For more information and outputs please see the project website.

National Coastal Change Assessment 2: Enhancing the evidence base and our ability to adapt
See all Projects

CREW Policy and Research Meeting on Flooding and Coastal Erosion 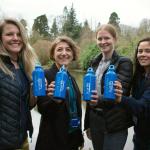 Our most precious resource - water!
See all News