Towards an economic value of native oyster restoration in Scotland 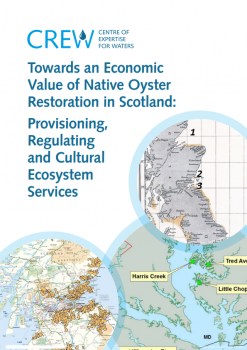 Native oyster beds (Ostrea edulis) are one of the most endangered marine habitats in Europe, with associated population losses of over 95%, mainly due to overfishing in the 19th and early 20th century. The loss of this keystone species has also meant a loss of oyster reef habitat for other shell and fin fish, and a loss of key ecosystem services for filtration and sequestration of pollutants.

The Dornoch Environmental Enhancement Project (DEEP) project is restoring 40 hectares of native oyster reef off the shore at Dornoch, to provide a bioengineering solution to treatment at the Glenmorangie Distillery at Tian.  As part of the overall project, DEEP is sourcing native oysters and this has already helped to overcome both known challenges to aquaculture of native oysters and identified barriers to setting up a shellfish supply chain.

This project set out to answer three research questions: