Impacts of Flooding in North-east Scotland 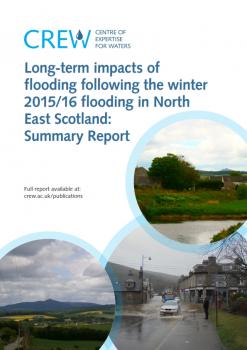 Many areas of Great Britain were badly affected by flooding over a fourteen-week period in the winter of 2015/2016. The flooding had considerable impacts on numerous communities, including private homes, business premises, transport infrastructure and agricultural land.

In Scotland, in early December 2015, severe flooding affected the south of the country with Hawick and Dumfries both badly affected. Late December saw further periods of heavy rainfall that brought more flooding to the South of Scotland, badly affecting Peebles and Newton Stewart. Severe flooding also affected the North-East of Scotland in late December 2015 and early January 2016. Some flooding was experienced in Aberdeen city, but most flooding and associated disruption was experienced around Aberdeenshire, in small towns, villages and the open countryside.

In response to the severe flooding experienced in North-east Scotland during the winter of 2015/16, the Centre of Expertise for Waters (CREW) commissioned project to;

The research was conducted over a three-year period in Ballater and Garioch, gaining new insights about the long-term impacts of flooding on people and communities. These insights informed several considerations for enhancing flood-risk management (before, during, and after a flood), and highlighted how personal and community resilience may be supported.