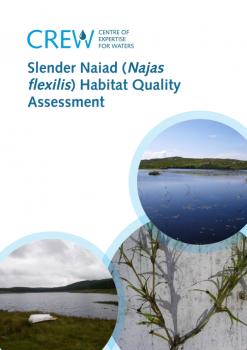 Slender Naiad (Najas flexilis) is a rare aquatic plant species of European conservation importance.The species is believed to be under increasing threat in its Scottish stronghold. However, the factors that affect the health of N. flexilis populations in Scotland are not fully understood, such as, why does the species disappear, and where and why it fares well in some sites. In addition, more needs to be known about what actions can be taken to ensure that the habitat quality needed to support populations of the plant is either maintained or restored. Thus, this project was commissioned by CREW to review the existing knowledge and available information on the habitat requirements of N. flexilis from Scotland and other countries where the species is native. The aim is also to identify what data are already available, where they are, and how to access them.

The now published report highlights that much of the sensitivity of N. flexilis to the known threats of, eutrophication, competition with other plants and the mild acidification of circumneutral lakes can be related to its physiology as an obligate user of CO2; N. flexilis plants being unable to metabolise bicarbonate for photosynthesis. This physiological restriction puts limits on its distribution, particularly with respect to the pH and alkalinity of the lake, and is the reason that N. flexilis is typically found in circumneutral waters, with C-limitation of growth likely to be present at pH <5.5 and pH>8. This physiological requirement may be the reason for the favourable habitat being associated with machair and with anecdotal evidence of populations in lakes around groundwater springs – which are normally high sources of free CO (Falkowski and Raven, 2007). In terms of acidification, lower pH levels below 6.5 may be detrimental to reproductive performance of N. flexilis, before lower pH levels <5 start impacting growth rates through CO2-limitation. In relation to eutrophication, nutrient enrichment leads to increases in phytoplankton, epiphyte and aquatic plant growth. This has the potential to lead o C-limitation for obligate CO2 users during daytime if pH levels rise above 8.  This is likely to be exacerbated by grassland or forestry improvements if liming of the land leads to increased pH of circumneutral lakes (but beneficial in acid lakes). The result of both eutrophication and alkalisation is a strong competitive advantage for aquatic plants that use bicarbonate. This is especially true for plant species that can tolerate and survive the combination of low light and increased ratio of bicarbonate to CO2 such as Elodea spp.  Whether or not invasive nonnative species, such as Elodea, have impacted N.flexilis populations indirectly, through reducing CO2 availability, or directly, through competition for deeper, low-light habitat is unknown; a combination of both direct and indirect impacts may be involved. This report is the output of the first phase of the project, and a second report will be published in early 2021, including information on which lochs in Scotland provide the most favourable conditions for Slender Naiad, and possible sites for potential re-introduction in the future.