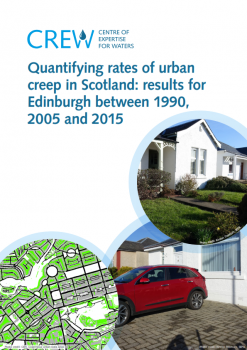 Urban creep, the process of converting gardens and other vegetated areas (which help to soak up rain), to built-up surfaces (which are impervious), is an important factor affecting surface water flood risk.  This project aimed to answer the question, what are the typical rates of urban creep for selected urban areas in Scotland? The project developed a method to map urban creep and applied it to aerial photography for Edinburgh for 1990, 2005 and 2015. This allowed the first city-wide estimates of urban creep to be produced for Scotland.

The report provides new quantitative data on the extent of urban creep in Edinburgh. One of the main project findings is that the average annual rate of urban creep in Edinburgh (around buildings and their gardens and grounds), between 1990 and 2015, is 6.44ha/year. This is equivalent to losing over eight football pitches of vegetated land per year.