Private water supplies and the potential implications of climate change 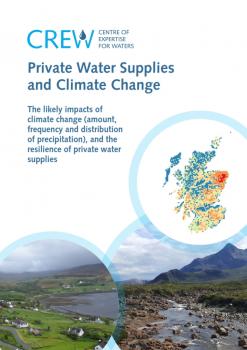 The aim of this study was to better understand the likely impacts of climate change (amount, frequency, and distribution of precipitation) on Private Water Supplies (PWS) in Scotland. In particular, the consequences on PWS resilience to water shortages in order to assess changes in vulnerability due to reduced quantity of water as a result of climate change.

Scotland has abundant water resources as a result of its mostly temperate and oceanic climate, but with a highly variable spatial and temporal distribution of precipitation. The west is generally wetter whilst the east is dryer, giving a distinct west to east gradient due to the ‘rain shadow’ influence of the western and northern uplands. Annual and decadal variability in precipitation can be large. Drought can be an issue with very low river and spring flows and low reservoir and loch levels known to occur in both west and east Scotland in connection with periods of prolonged (i.e. lasting for one season or longer) dry weather. The 2015-2021 River Basin Management Plan (RBMP) report compiled by the Scottish Environment Protection Agency (SEPA) points to a greater risk of water flows being worse than the good status required by the Water Framework Directive (“Directive 2000/60/EC) in rivers used for irrigating cropland but only during dry weather. It is essential to address resilience to drought given the latest climate projections for the UK (UKCP18) indicating increasingly variable weather, including: altered spatial and temporal precipitation patterns and variable amounts across Scotland (West becoming increasingly wetter, East becoming drier); higher probability of drier and warmer summers; and increased rates of loss of surface water through greater evapotranspiration (from plants and ground surfaces) and evaporation from water bodies.

The 2018 drought was marked by its severe impacts on decentralised rural water supplies, with unprecedented numbers of requests for support. These PWS are the responsibility of their owners and users rather than Scottish Water. The Drinking Water Quality Regulator (DWQR) reported that in summer to autumn 2018 many PWS across the country ran dry and at least 500 of them requested emergency assistance from their respective Local Authorities. The Scottish Government (SG) provided additional funding (c.£475K) to Local Authorities (LA) and to Scottish Water (SW) to enable emergency assistance to be provided free of charge in the form of water bottles and water in tankers (DWQR 2019; SG 2018). The extent of emergency assistance requested by PWS users during 2018 raised awareness about their vulnerability in the face of future climate projections and highlighted the need to improve their resilience to drought. PWS numbers vary from year to year but
generally serve approximately 4% of the resident population in Scotland and potentially many thousands of tourists, primarily in rural areas. In 2018, there were 21,980 PWS and the largest population relying on PWS reaching approximately 30,000 and 40,000 people in Aberdeenshire and Highland, respectively. PWS use a variety of sources such as boreholes, wells, springs, riverintakes, lochs or rainfall and may serve a single house, rural communities up to 5000 people, schools, hospitals
and other public, holiday and business premises. The Private Water Supply (Scotland) Regulations 2017 (the PWS Regulations), which transpose the requirements of the Drinking Water Directive (DWD) (Directive 98/83/EC) as amended to national law, put a duty on LA to monitor and carry out risk assessment in PWS serving more than 50 people, or public or commercial premises. However, the PWS Regulations address PWS vulnerability to pollution and public health risks and not to drought.