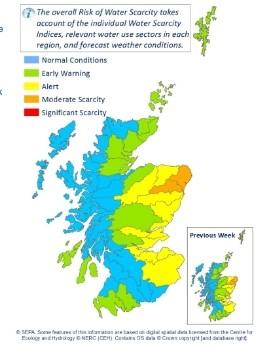 In Scotland, we often take water for granted. Indeed, it seems to be one of our most abundant resources, especially at times of frequent rainfall when flooding is an issue. So when we think about water management in Scotland, we tend to think about flood risk management, as well as improving the water quality for drinking and bathing, but perhaps less so about water scarcity or droughts. This is changing, and our team at CREW is actively exploring this emerging challenge.

The prolonged dry period during the summer of 2018 (and again during the winter and spring of 2020) showed that once rainfall becomes scarce over a prolonged period, it impacts Scottish communities and businesses. Notably, many people and businesses that depend on private water supplies (which are directly sourced from rivers, wells, boreholes, etc., rather than being connected to the Scottish Water network) saw their supplies run dry. Other aspects of the hydrological system can also impact water levels, including reduced snowfall in winter (leading to less snowmelt to feed rivers and groundwater in spring/summer), as well as changes to water use and abstraction for industry and agriculture, so both climate change and societal land and water use are key aspects.

When the ground is dry after a period of drought, it can take a long time for the groundwater to recharge and rivers to recover, so the impacts of drought can be experienced beyond the actual period of dry weather. For example, in 2018, many private water supplies (PWS) ran dry towards the end of September, well after the return to more normal rainfall patterns. Similarly, while rainfall patterns in the first two weeks of July of this year returned to average for this time of the year, the Scottish Environment Protection Agency (SEPA)’s Water Scarcity Situation Report (published on 16th July 2020) shows that many areas of Scotland were still on early warning for water scarcity, with vast parts of Scotland’s East being on alert, and parts of the North-East continuing to show moderate scarcity. Even more recently, Keith Marshall, user of a private water supply in Aberdeenshire, still encountered issues with his supply. On 19th August 2020, he explained: “despite recent summer rains, the water table and the supply in our well, has continued to fall – average summer rainfall is not enough to compensate for effectively two seasons of local drought. Our neighbours with deeper bore-hole supplies are experiencing similar issues, where rainfall is not sufficient to recharge deeper groundwater supplies.”

A recent study published by CREW found that while North-East Scotland typically experiences drier weather than the rest of the country, this is likely to become more acute in the future, and particularly impact those businesses and households that rely on PWS - of which the North-East has the highest density. While it is not possible to predict exactly how climate change will impact Scotland, the latest MET Office probabilistic climate change projections show that summers in Scotland are likely to become hotter and drier – although periods of more intense rainfall may also occur throughout the year. In other words,we are likely to experience more extreme weather events which will directly impact how water is managed. And if summers are likely to become hotter and drier, this will impact PWS and the local economies they support, in particular those reliant on surface or shallow water sources.

At Scotland’s 2019 World Water Day Event, jointly  organised by CREW and the Hydro Nation International Centre, we also drew attention to the rising concern around water scarcity in Scotland, focusing the event on “Resilience to Drought and Low Flow Conditions in Scotland”. A wide range of scientists and stakeholders from the regulatory, business and policy communities were invited to present, discuss issues, and share experiences on how to enhance resilience to drought in Scotland.

The rising concern around water scarcity led SEPA to publish in 2015 (and updated in July 2020)its first National Water Scarcity Plan outlining what actions should be taken ahead of, and during, prolonged dry periods.