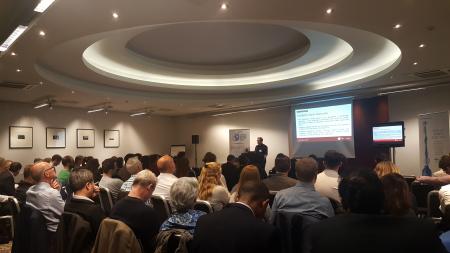 Every year on 22nd of March, we celebrate World Water Day. This year, The Centre for Expertise on Waters (CREW) and the James Hutton Institute, with the financial support of the Scottish Government, and in partnership with the University of Stirling and the Centre for Ecology and Hydrology, organised an event around this year’s UN theme of “Leaving No one Behind”.

The first part of the event focused on presentation from scientists, stakeholder groups and government representatives, discussing various issues and strategies around drought and drought management in the UK and Scotland in particular. With recent warnings from scientists and policy-makers that England would be suffering considerable effects from droughts within the next 25 years, and periodic droughts that affected Scotland over the last couple of years, there was a lot of discussion about this timely topic.

Stephen Turner from the Wallingford Centre for Ecology & Hydrology presented on monitoring and early warning systems to support enhanced resilience to drought across the UK. A number of presentations focused on droughts in Scotland over recent years – Mark Hunter of Scottish Water discussed response strategies to ensure as little impact as possible on end users, while Rebecca Millar of Citizens Advice Scotland presented research outputs regarding end users of private water supplies and what could be done to improve resilience to drought and other climate change impacts on water scarcity and quality for private water supplies end users. Further, the impact of drought and low flow conditions on key water-dependent Scottish industries was discussed. Hamish Moir of cbec and Chris Conroy of the Ness Salmon Fishery Board presented the particular context of Salmon migration and nesting, and how Scottish salmon populations are threatened by rising water temperatures and low-level water flow, affecting the salmon’s ability to migrate, and sometimes bringing even lethal consequences. Creating and re-storing wetlands may be a key strategy to alleviate some of this risk to Scottish salmon, and simultaneously enhancing resilience to both droughts and floods. Paul Hammett, Water Specialist at the National Farmers Union presented on resilience and adaptation strategies introduced over recent years: In particular, the soil bank, and more recently, the water bank, allows farmers across a larger region to exchange soil/manure, or water, thereby reducing impacts of regional climate effects for farmers. Ronald Daalmans from Chivas Brothers shared insights into the particular challenges the Whisky industry faces in times of drought and low flow conditions.
After a final presentation by Scott Mcgrane of Fraser of Allander Institute on the future challenges of environmental change on water as an economic resource in Scotland, the participants split up into three discussion groups, focusing on three key topics at the policy-research nexus:

The results of these expert discussions will be published in a report in early summer.

Closing remarks were given by Jon Rathjen, Head of the Water Industry Team at the Scottish Government, putting the day’s discussions into the context of a long-term vision for Scotland as a HydroNation, by not only continuing to develop innovative solutions to both drought and flooding in Scotland and internationally, but also by capitalising on this great resource that Scotland has in abundance. He alerted everyone present to not only focus on the specific remedies to specific problems, - but also to think of water, and Scotland’s expertise in managing waters, as the great potential that lies within for both Scottish industries and Scottish people, all the while ensuring the long-term sustainability and protection of the precious resource that is water.

A Short Report and the Full Report are available.

The effects of drought on freshwater fish and river restoration options to mitigate impacts,

The importance of a science:policy dialogue in an ever-changing world ,

Monitoring and early warning to support enhanced resilience to drought in the UK: recent advances, challenges and prospects? ,

Scottish Water’s Planning, Preparation and Response to the 2018 Drought,

Drought and its effect on agriculture and irrigation practices ,

The future challenges of environmental change on water as an economic resource in Scotland ,